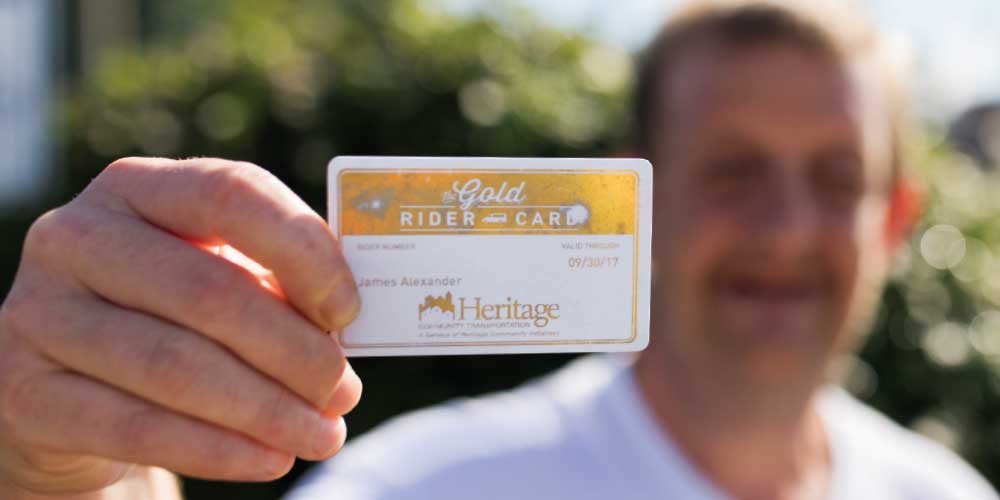 James Alexander is one of 6,000 people per month who rely on transportation assistance from Heritage Community Initiatives to run errands and get to work and medical appointments.

By Mackenzie Carpenter, Freelance Journalist based in Pittsburgh

MOST OF THE TIME, a person’s ability to make it in the world comes down to one thing: the ability to show up.

James Alexander learned that lesson after the Port Authority of Allegheny County eliminated his bus route to McKeesport, where he worked as a customer service representative.

“I’ve had a car in the past, but I just couldn’t afford one at that time,” says Alexander, who lives on Route 30 in North Versailles. “I really depended on the 60M to get to the office.”

After making some phone calls, he was led to Heritage Community Initiatives in Braddock, which provides crucial transportation at minimal cost to residents of eastern communities whose bus lines have been cut and who must get to jobs and medical appointments.

Alexander was immediately directed to the Heritage Community Transportation vans, basedat a Rite Aid parking lot. “It was five minutes from my house,” he says. “It was such a relief.”

For 41 communities in the eastern reaches of the Pittsburgh region, “when steel went away, so did access to a great deal of public transit,” says Paula McWilliams, president and CEO of Heritage, which is the only nonprofit in the state providing what is considered public transportation — three fixed routes that charge 25 cents a ride, serving about 6,000 people a month.

More than 60 percent of its riders have an average household income of less than $10,000, and many have more than one job, which is where Heritage’s new call center comes in. As of June, the call center, which is funded by The Pittsburgh Foundation, will design transportation plans that help people get from point A to point B in areas not covered by Heritage’s vans.

“Whether it’s a senior needing dialysis in the South Hills, a worker with a job interview in Robinson, or a mother whose child has an asthma referral in Cranberry, very often the callers have no idea how to get there,” McWilliams says. “And not everyone has access to the internet or a smartphone. That’s where we come in. The key to social mobility is to get people where they need to go.”

This organization is among the 97 nonprofits that benefitted from the May 23, 2017 Critical Needs Alert online giving event. That day, a total of $1,273,000 was raised for nonprofits providing basic needs: food, shelter, transportation, child care and physical and mental health care. Learn more about the Critical Needs Alert by reading this summer 2017 Forum story.

Every one of the 97 nonprofits that took part in the May 23 Critical Needs Alert has a significant impact on the community. To demonstrate the difference these organizations are making, we’ve profiled four, each of which provides basic needs directly to people in their communities. Read their stories here: