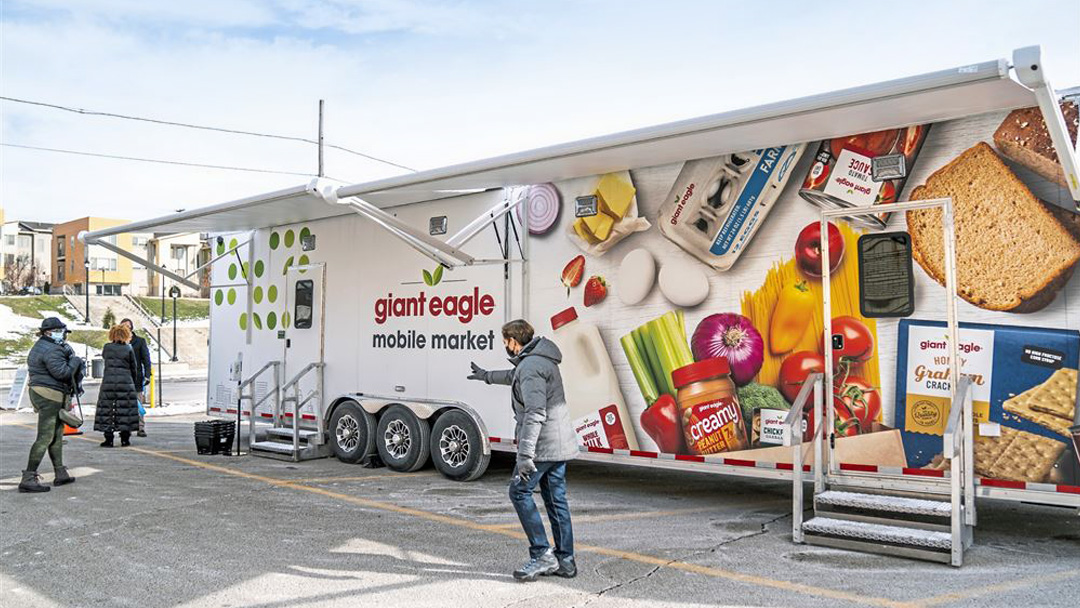 A few weeks ago, Rankin Mayor Joelisa McDonald posted a picture on her mayoral Facebook page of a new concept from Giant Eagle. Once a week, the company would bring to her town a trailer, called the Giant Eagle Mobile Market, filled with fresh vegetables, meats, and other pantry and paper items for purchase.

“It went viral — well, viral for a mayor page,” said Ms. McDonald, noting that the post has gotten more than 300 shares. “The response was amazing. We’re still getting tons and tons of feedback from the community and from neighboring communities.”

The idea began more than a year ago as protests and calls for social justice spread across the country after the murder of George Floyd, said Dan Donovan, Giant Eagle’s senior director of corporate communications.

The idea is to serve communities that don’t have full-service grocery stores, improving access to produce, meat and other staples.

“We are considered a food desert area,” said Ms. McDonald, who was appointed mayor of Rankin in March and elected in November. “As far as groceries, we don’t really have that amenity in our community. It was kind of a no-brainer for me. It’s super-exciting times for us.”

Giant Eagle is partnering with a community or government organization in each municipality, such as the Kingsley Association in Larimer, the Jasmine Nyree Campus in Sheraden and the YWCA Greater Pittsburgh in Homewood. The community partners will work to spread the word in the community about the mobile market, get feedback on the grocery selection and grant access to their spaces for the market to park.

In Braddock, partner Heritage Community Initiatives has been distributing flyers about the mobile market and hosted a trial run of it on a recent Saturday. The market will set up at the Heritage 4 Kids Early Learning Center run by Heritage right on Braddock Avenue.

“To think that you can have such easy accessibility is phenomenal,” said Paula McWilliams, president and CEO of Heritage, which in addition to the education programs distributes about 100,000 meals in the eastern part of Allegheny County. “There are lots of individuals in Braddock that don’t have ready access to a vehicle, and having the mobile market right in the center of town will be tremendous.” The market may also be convenient for people in neighboring communities who can get to Braddock easier than they can get to a full-service grocery store, she said.

The idea of a mobile market is not new, but it is new in this form in the Pittsburgh area. The grocery store chain Kroger runs a similar program in the Louisville area in partnership with the food bank there, and Giant Eagle consulted with Kroger to develop its concept. The Greater Pittsburgh Community Food Bank had previously brought groceries into neighborhoods without grocery stores through its Green Grocer mobile service, but that program ended in November.

Giant Eagle’s mobile market will be stocked with about 250 items at the same prices as any other Giant Eagle. Initially the mobile markets will accept debit and credit cards, checks and SNAP but not cash. Based on community feedback, it is exploring adding a cash option.

Giant Eagle has heard from many other communities that are interested in joining the program, but it plans to offer the Mobile Market in just the five original communities at first while it refines the concept.

“This being something that we’ve never done before. The mobile market in six months may look very different than it does this week,” said Mr. Donovan. “What we want first and foremost is for this to be accepted by our communities. We hope that we can expand into more communities in the coming months, but we won’t do that until it’s evolved into a place where it’s serving the first five communities.”

In one of those communities, Rankin, Ms. McDonald, is excited not only for the community as a whole but also for herself: As a vegetarian, she is thrilled to have a walkable option for fresh produce.

She is even brainstorming ways that she can help her constituents take full advantage, such as making her own YouTube videos filming the preparation of some family sized meals with items from the mobile market. “It’s super premature,” she said, “but I just want to keep the momentum going.”